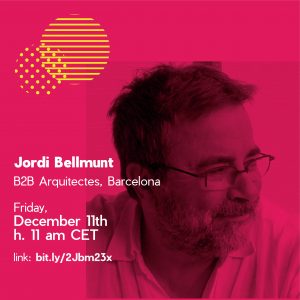 With a degree in Architecture obtained at the ETSAB of Barcelona, Jordi Bellmunt has lectured there in the Department of Urbanism and Regional Planning since 1982. Since 1987 he has been lecturing for the Masters in Landscape Architecture held at the Polytechnic University of Catalonia (UPC), of which he has been director ever since 2000. He has been the director of the Centre for Research and Projects of Barcelona landscapes of the Department of Urbanism and Regional Planning of the UPC, since 2002. He promoted the European Biennial of Landscape Architecture Barcelona, of which he supervised the first four editions. He is currently working as an architect and landscape specialist. His articles are published in various specialised magazines. 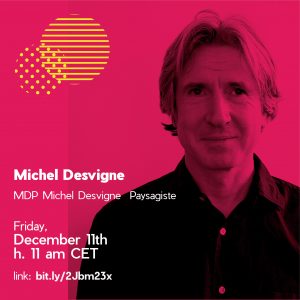 Michel Desvigne is a landscape architect internationally renowned for his rigorous and contemporary designs and for the originality and relevance of his research work. He has developed projects in more than twenty-five countries, where his work helps in highlighting the landscapes and rendering them visible, in understanding the mechanisms at work giving them form, and in acting upon these mechanisms in order to transform the landscapes and imbue them with meaning. Among Michel Desvigne’s most renowned awards are 2020 Equerre d’argent for the Quai Southampton requalification (Le Havre, France), 2019 AIA Honor Award for Detroit East Riverfront Framework Plan (US), 2014 European Prize for Urban Public Space and 2011 France's Grand Prize for Urbanism for his continual contribution to and reflection upon the city and larger territory.

For close to thirty years, Michel Desvigne has designed and implemented numerous major projects in France and around the world. As in his latest book " Transforming landscapes " (publication director: Françoise Fromonot), Michel Desvigne will present, during this lecture, a selection of these territorial scale operations. What intentions, strategies and professional culture underscore their design process? What landscapes and uses are produced by these public space projects that mature over a long period of time? Michel Desvigne will reﬂect on these questions, which are central to his practice, and on the main themes that run through his work.

Architect, landscapist and urban planner, Andreas Kipar is the founder and Creative Director of the international landscape architecture studio LAND, with offices in Germany, Italy and Switzerland. A graduate in Landscape Architecture at the GHS University of Essen and in Architecture and Urban Planning at Milan Politecnico, where he has taught Public Space Design since 2009, he often holds seminars and lectures at a number of universities, including Naples, Dresden, Venice, Zurich, Versailles and Dortmund. He is a full member of the German Academy of Urban and Regional Planning (DASL), the Association of German Landscape Architects (BDLA), the Italian Association of Landscape Architects (AIAPP) and the Italian Urban Planning Institute (INU). He is the inventor of the “Raggi Verdi” [Green Rays] model in Milan, which connect up the various areas of the city to favour a new slow mobility from the centre towards the suburbs. This model, internationally recognised as a pioneering one in green urban planning, has also had subsequent applications in Essen, the European Green Capital 2017, and in the award-winning Smart City of Rublyovo-Arkhangelskoye in Moscow. 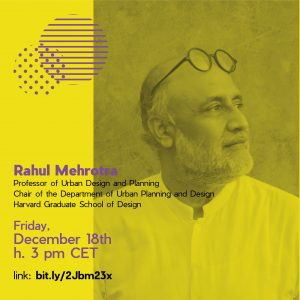 He is a practicing architect, urban designer, and educator. His Mumbai + Boston based firm, RMA Architects, was founded in 1990 and has designed and executed projects, including government and private institutions, corporate workplaces, private homes, and unsolicited projects driven by the firm’s commitment to advocacy in the city of Mumbai. Mehrotra is a member of the Steering Committee of the Laxmi Mittal South Asia Institute at Harvard. In 2012-2015, he led a Harvard University-wide research project with Professor Diana Eck, called ‘The Kumbh Mela: Mapping the Ephemeral Mega City’. This work was published as a book in 2014. His research was extended in 2017 in the form of a book titled ‘Does Permanence Matter?' The research was also extended into an invited exhibition at the 2016 Venice Architectural Biennale.

Mehrotra’s latest co-authored book is titled ‘Taj Mahal: Multiple Narratives’ which was published in December 2017. Mehrotra’s research on urbanism is focused on evolving a theoretical framework for designing in conditions of informal growth – what he refers to as the ‘Kinetic City’. He has run several studios looking at various aspects of planning questions in the city of Mumbai, under the rubric of “Extreme Urbanism”. His current research is on the small towns and emerging urban conglomerations in India, and is expected to be published as a book in Fall 2019. 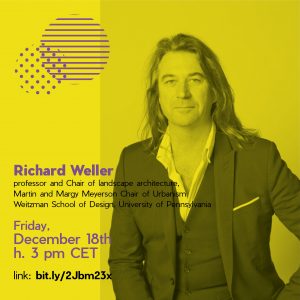 Richard Weller is the Meyerson Chair of Urbanism, professor and Chair of landscape architecture, and co-executive director of The Ian L. McHarg Center for Urbanism and Ecology at the University of Pennsylvania. He is former co-director of Room 4.1.3- a design firm acknowledged with a Penn Press monograph (2005) and noted for critical design projects such as the National Museum of Australia. He is Creative Director of the award-winning LA+ Interdisciplinary Journal of Landscape Architecture. He was formerly a Winthrop Professor of Landscape Architecture at the University of Western Australia, and director of the Australian Urban Design Research Centre (AUDRC)

In over 30 years of practice he has worked simultaneously as an academic and a consultant specializing in the formative stages of projects ranging from gardens to plazas, memorials, museums, suburbs and waterfronts. His research projects have involved scenario planning for cities, megaregions and nations. Weller’s work has been exhibited in galleries such as the Museum of Contemporary Art in Sydney, the Gardner Museum in Boston, the MAXXI Gallery in Rome and the Canadian Design Museum. Weller’s most recent research concerns global flashpoints between biodiversity and urban growth. This research is documented in his latest publication; a web-based platform titled ‘Atlas for the End of the World – Atlas for the Beginning of the Anthropocene’. The Atlas analyzes how nations are performing with regard to reaching 2020 UN targets for protecting biodiversity and identifies the conflict zones between urban growth and endangered species in over 400 cities. 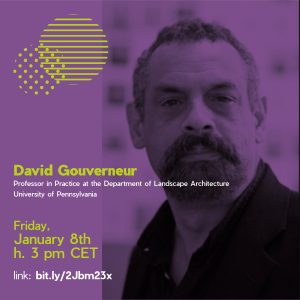 David Gouverneur is Professor in Practice at the Department of Landscape Architecture of the University of Pennsylvania. David Gouverneur received his M.Arch in Urban Design from Harvard University (1980) and his B.Arch from the Universidad Sim6n Bolivar in Caracas, Venezuela (1977). He was Chair of the School of Architecture at Universidad Sim6n Bolivar (1987 -91), as well as a professor in this School's Departments of Architecture and City and Regional Planning from 1980 to 2008.

From 1991 to 1994, he was the Director, and from 1995 to 1996, the Adjunct Secretary of Urban Development of Venezuela. He was cofounder and professor of the Urban Design program and Director of the Mayor's lnstitute in Urban Design at Universidad Metropolitana, both created with the support of Harvard University, in Caracas, Venezuela (1996-2008).

He has taught at the University of Pennsylvania since 2002, and since 2012 he is Professor in Practice of this Department. His professional practice focuses on urban plans and projects for historic districts, the rehabilitation of areas affected by extraordinary natural events, new centralities and mixed use districts, improvement of existing informai settlements and planning ahead for emergent informai occupation, tourism/recreational areas, and the rehabilitation of cultura! landscapes. He has lectured extensively, written articles and organized seminars and workshops, particularly in Latin-America for over three decades, motivating academics, professionals, and notably the generai public to engage collectively in important issues affecting the urban arena, particularly addressing social inequalities, and environmental problems, and cultural erosion. 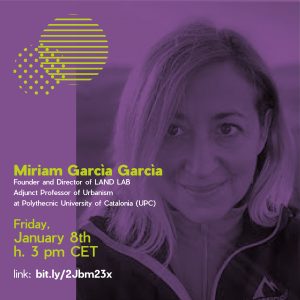 PhD in Architecture, Landscape Architecture, Urban Planner, founder and Director of LAND LAB, Landscape Laboratory S.L., office based in Barcelona. She collaborates from the studio in different projects aimed at the promotion and development of spatial planning, landscape, urban design and its adaptation to climate change. Many of these works have national and international recognition such as the Prize of the XII Biennial of Spanish Architecture and Urbanism or Good Practice 2012 of the Un-Habitat Committee. In addition to this professional experience, she workeds in the public administration of the Government of Cantabria, heading the Directorate General for Urban and Regional Planning, at the beginning her professional career (2003-2007) 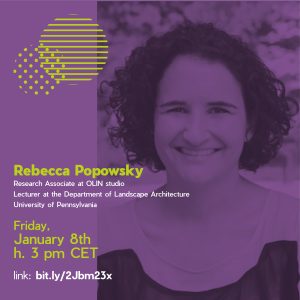 Rebecca Popowsky is lecturer at the University of Pennsylvania and has been a practicing landscape architect with the OLIN Partnership since 2009, where she has contributed to a wide-range of the studio’s project work.

Projects include the design and construction of Canal Park in Washington, DC, Dilworth Park in Philadelphia, and collaboration with the Army Corps of Engineers on Potomac Park Levee on the National Mall to restore the FEMA floodplain. Prior to joining OLIN, Rebecca worked as an architectural designer in Florence, Italy, as a timber frame home builder in Vermont and as a professional trail builder with the Adirondack Mountain Club.  Rebecca earned dual master’s degrees in Architecture and Landscape Architecture from the University of Pennsylvania, a Bachelor of Arts in Architecture and Urban Studies from Yale University and participated in an Education Abroad Program in Italy through Syracuse University.